The Power Of Self Talk 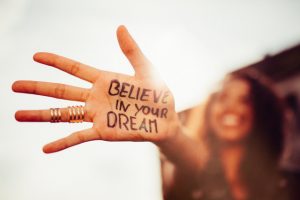 With the re-release of our first ever podcast, UIO: Your Confidence Inside Out with Cheryl Grace, I’ve been thinking a lot about the power of encouraging words and the impact they have on building self-confidence.  In the podcast, Cheryl points out the importance of positive self-talk.  Don’t say things to yourself that you wouldn’t say to a good friend, someone you respect.

Out with the ‘I can’t do anything right, I am a complete failure, I’m stupid and so in.’  And in with, ‘I can do this. I am good enough and so on.’ This is a truth that I have not always understood but upon reflection, negative self-talk definitely influenced my confidence, hence some of the decisions I made earlier in life.

For instance, when I was a teenager, I bought into the old saying sticks and stones may break my bones but words will never hurt me.  In short, I didn’t get into many physical brawls, if any—not much of a fighter but almost always there was a war of words going on with another person or inside of my head, whether it had to do with not liking my looks or not thinking I was good at something like standardised testing.

On the latter, I now know it was believing in discouraging words of others and the negative self-talk that stood between me and my confidence to crack the tests.  Following the first low score I received on the Preliminary SAT/National Merit Scholarship Qualifying Test (PSAT), I took a big hit in the area of self-esteem.

Until then I had been pretty evenly matched with those around me, those in my class, in literal arts subjects in particular. Admittedly, I started lagging behind others, mainly boys in Maths around fourth grade. That was the year of integration of the schools in the US, which is an entirely different story to be told another time but does have commonalities with this one, regarding encouraging and discouraging words. Know the power of both.

Anyhow, back to the PSAT, there was the smart boy, who most likely was a genius, who was miles ahead of everyone, who achieved an unbelievable score but I had not necessarily felt inferior to him or any of my other peers until the first low score came, which influenced my standing with teachers and peers, their outlook on my future.

Though I can’t remember a moment where I sort of shrank within, I remember vividly losing confidence, feeling less than others and going into over drive on negative self-talk. This denigration of myself combined with being told that I would need to dream smaller about college and university would haunt me for years to come.

For years as a writer, I didn’t have the confidence to believe in my views, even if they were rejected widely. Thus, I started hating constructive feedback and really didn’t grow as a writer until I started believing in myself again. This began with other wonderful writers and acquaintances propping me up and encouraging me to get on with it. I had a gift.  Then I started sharing my work and reminding myself all the time that I had a gift and even if big publishers didn’t see it, I would still write a novel or two, maybe even three.  We’ll see about that one.

Anyhow, the point is this:  don’t underestimate the power of encouraging words, not only from yourself but also from others.

Discouraging words can be a confidence buster whether from you or from others. Where you are in control, remember that negative self-talk is denigrating and limiting and positive self-talk is affirming and inspiring.  That is why affirmations are so powerful. Stay positive.

And when others speak negatively to you, don’t believe them.  Keep in mind that it is hurt people who tend to hurt others and during the teen years, life can be fast and furious. Sometimes it pays to stop, think and wait awhile before saying things to yourself that will not serve you or take on board the negative words of others.

As for that old saying about sticks and stones, don’t believe it!  Words are powerful and not only can they defend you, they can also offend. For more hot tips, check out UIO, the podcast for teen girls.

Written on March 14, 2019 at 10:48 am, by SLewis
Categories: Blog, Homepage, On Wellbeing, Teen Girls, UIO: You Inside Out   |   Tags: affirmations, Cheryl Grace, podcast for teen girls, positive words, PSAT, self confidence, self talk, sticks and stones, UIO: Your Confidence Inside Out, Wait awhile