Sixty-five years and counting poetically so 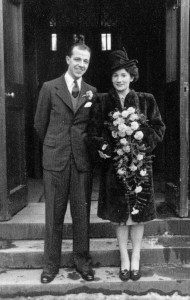 Those of you who follow both this and my HuffPost blog will know that I’ve been grappling with loss here lately. My father-in-law died back in March and just four months later, his bride of 65 years has followed, my husband’s mother.

Normally, that’s the way it happens I have been told repeatedly–one lifelong partner so mourns the loss of the other that the heart pines until it stops altogether. If I didn’t see it for myself, I’d insist that it was a historical tragedy of some sorts.

But it was not a play, it was Peta’s life, but no less dramatic, particularly her final days. The very thing that was so wrong about her suffering was the thing that was so right about it–she simply couldn’t get accustomed to life without her husband.

And why should she at 96. Never mind that those of us who cared about her did everything in our power to help her overcome, which is a good segue to the National Health Service  (NHS).

Hailing from a country that seems to pooh-pooh any healthcare package that reaches out to the masses, I’ve never fully embraced the NHS for a number of reasons (it’s often confused with Welfare, scorned for inadequate treatment, spurned for inconsistency in doctors, and so on) but having witnessed it firsthand for weeks now, I have opened my arms to it, that is so long as the communication is effective.

Admittedly, however, that is not always the case. Communications is fair at its best in the NHS. During my mother-in-law’s stay in hospital, I had to assert myself more times than not owing to inadequate communications. Still barring the frustrating times, I saw that the NHS can work, but of course, all GPs and hospitals are not equal, as is often pointed out in the news. Recently, I read of a south London hospital that failed a dehydration patient, mainly down to poor communication.

In the case of my mother-in-law, however, the NHS hospital and the surgery (doctor’s office) both succeeded but they shall remain nameless to spare them the big head. Of course, there were a few surly employees and at least one or two incompetent ones, but one or two bad apples don’t spoil the whole barrel.

Admittedly, the best part was avoiding red tape for the most part. Okay, there was some…okay a lot, but the point is there was no haggling with insurance companies, etc…And though I did miss the continuity of doctors, I saw the merit in a system that levels the playing field when it counts the most.

Though we could have opted for private care and in some instances we did, Peta, like many Britons, paid into the healthcare system via her taxes, and it paid off for her. And though the NHS is available to anyone in the country, not just those paying taxes,  it’s still different from Welfare in that it is not a government provision, rather a system implemented by the government that can and does work more often than not.

As for Peta, though we already miss her sorely, we take comfort in knowing that her ending was rather poetic, much like hers and Joe’s life together–65 years and counting. Beautiful – yes, that sums it up.