Times Have Changed Since the Olympics 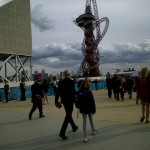 Women playing basketball and men jumping rope, Double Dutch at that, epitomised Day 2 of the 2012 Olympics. My, how times have changed since the first modern games in 1896.

But what hasn’t changed is the enthusiasm and drive of the athletes nor has the ingenuity of human beings. You have to see it to believe it. Honestly, before the Olympic Park and Westfield Shopping Centre of course, it was just land. Land!

But do not despair over lost land. It has been put to good use for the love of country and for sport, of course. From Anish Kapoor’s Olympic sculpture, the Arclor Mittal Orbit (like or it loathe it) to the sleek Aquatics Center, the crowds, me included, ooh and aah at every vista. Not to mention the enthusiasm for the up close and personal experiences.

You should have heard the crowds roar for the women’s basketball teams. Yes! We had a top row seat inside the arena, fondly called the mattress by BBC Breakfast presenter Bill Turnbill. To continue with that metaphor, the arena, though gigantic,  was cozy and comfy.

I can’t claim to have been in that many arenas over the years, though I have been in plenty of gymnasiums, but of the two or three I have visited, I can say that the mattress matched up. So what if it didn’t have a hotdog stand for my American friend but the sound, the energy, the crowds made up for it.

So we did, but speaking of coming a long way, women athletes most certainly have. So many of them are setting new records and clenching the medals. Eyes are on Zara Phillips, the Queen’s granddaughter, today as she rides with Team GB in the equestrian event.

Other women are raising the game too, case in point: the USA Women’s basketball team. I can’t say enough about their finesse, their professionalism. No wonder they have won thirty-four consecutive games as of last night.

As I watched them play, I attempted to text every American I could get in touch with to ask, if nothing else, why so secretive? These women are a national treasure and will surely change the game of women’s basketball the world over, if they already haven’t.

See my views on women’s athletes at London 2012 in my HuffPost blog.

Meanwhile, I’m exhausted today. Still on a high, I’m already thinking about what kind of shoes I’ll wear the next time we head out to the Olympic Park. Though I have found the travel advisories to be more bark than bite, the tips on getting around the park are real.

Comfortable shoes are a must as is rain wear and a darn good jacket. Never mind that this is the last day of July.  Gone are the days when summer was summer and winter was winter and so on.

My, how times have changed.