Emotional Bullying Can Come From Afar, Too 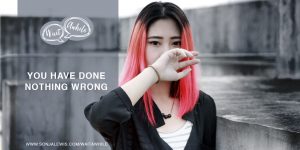 Emotional abuse is a big topic. No wonder we keep returning to it—it can happen to anyone and at any time. More often than not, the abuser, if you will, is someone familiar, whether at school, home, work and so on, but there are instances when emotional bullying can come out of left field.

Someone who you hardly know hurls an insult your way or says something that makes you intensely uncomfortable.  And though the person speeds off in their car, disappears into the night, leaves the room, their words stick with you far longer than their presence did. They hang over you like a dark cloud.

So much for sticks and stones may break my bones but words will never bother me.

Recently, I drove up to my neighbourhood after a morning session with my personal trainer. Definitely on a natural high, I felt good as I reversed into the space on the opposite side of the road from my house. With a million things to do, I gave myself kudos for parallel parking in one go and jumped out and grabbed the shopping I had picked up along the way. As I crossed the road, my equilibrium was shattered by the honking of a horn and a voice yelling at me.

“Hey, move your car,” the woman said.  “You are parked in front of my house. Why can’t you park in front of your own house?”

I did a double take to recognise my neighbour’s irate face behind the wheel of a small red car. Quickly I got out of the road and then turned to try to reason with her, though she continued to raise her voice and sound her horn.

Still I tried to remind her that with my parking permit and hers, we could park anywhere we wanted to in the given area, yet she wasn’t having any of it, though she admitted that she didn’t own the road.

She spouted off something about being inconvenienced. “Why can’t people just park in front of their own house,” she said loud enough for the whole street to hear.

“There is a space right in front of my car,” I said rather quietly. “You can park there.” This space was one door down from hers.

Now her voice an even higher pitch, she said a thing or two that I didn’t understand but I did make out “why don’t you park in front of your own house?”

Clearly, she was distressed, so I thought maybe I should move the car. I didn’t want to suffer a penalty for parking in a space that I had a right to park in.  So, I said, “if it means that much to you, I will move my car. Honestly!”

My gesture enraged her, caused her to shout at the top of her voice. “Why can’t you park in front of your own house,” she demanded repeatedly until I answered.

“Look you have to get a special permit if you want to park in front of your house all the time,” I said. “Anyhow, to answer your question: I don’t want the sap from the trees on my car.” This I thought she would understand.  I mean, who would want sap on their car, whether new and amazing or old and dilapidated, right.

By now, she was in hysterics. She told me to F-off and dare I mention the other expletives. On that note, I unlocked my door and went into my home but even behind the safety of my own door, her words had seeped into my pores.  Exasperated, I told Paul what had happened and for days to come I told everyone I came in contact with. Later that day I had to move the car and when I came back she was in the space, thus I parked in the one in front of her.  But the next morning, I moved the car as far away from hers as I could and tried my best to avoid her.

Still, weeks later her words are in my head but not as boldly as they were and not because time has waned them but because I have had to first of all, recognise that I was emotionally bullied, even if it did come from a stranger. No ifs, ands and buts about it. Next, I had to fully accept that as personal as it felt that it wasn’t. Though, I don’t believe that she would have behaved so appallingly with Paul or any man, the abuse was about her and not me. Clearly, she was very distressed and projected her anger on me. So I have long stopped trying to name it!

Finally, I’ve had to constantly remind myself that I have a right to park anywhere I want to in the area of my permit, without being yelled out. I didn’t do anything wrong. It was my neighbour who was clearly wrong but pointing fingers and casting blame keeps me in a space that doesn’t serve me.

What serves me is to think my way positively out of the corner, she backed me in.  A great segue to two bits of good news. First, she’s gone–the relevant neighbour moved a week or so later, which might explain why she was so cavalier but even before she left, I kept my distance. Next, we’ve re-released our podcast, On Emotional Bullying with Jillian ‘JJ” Simmons.  Check it out, not only for tips on how to manage emotional bullying with those up close and personal but also with this who are distant strangers, too.

It could be what you need to put the distance between you and an emotional bully. It worked a jewel for me.