Gnats in London, Anything but Idealistic 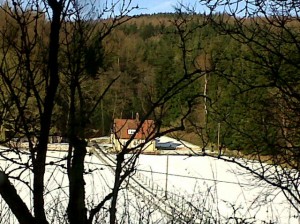 In the Georgia countryside where I grew up in the US, gnats were part of the landscape and surely still are. As a child, I remember that they were prevalent in the summer time, causing great disruption to play and picnics.

Having moved to the city, I thought gnats were long behind me. Not a chance.

Since the weather has begun to warm up in London, I have experienced swarms of them on the Thames Path, although they go by the name of midges, here.

Midges, gnats, they are all the same, if you ask me or pretty close kin anyhow. The thing is, however, I don’t remember gnats biting and swarming in the forefront all the time. Surely they crashed barbecues and ballgames regularly but either bored fairly quickly or sensed that they would be penalised if they didn’t leave. Away they went.

I have this image of seeing them in the distance, a part of the landscape. How very idealistic.

Realistically though, midges stake out in the path of walkers and runners and fly right along, until the next best thing happens by. So if you happen to be the only thing, so to speak, on the path, you’re fair game.

Apparently, midges live near water, which explains why I’ve only started to notice them lately.

Short of staying away from rivers, streams, etc. what are walkers, cyclists and runners to do? We could go out in only cold, rainy weather, but that wouldn’t do our attitudes or our physical health any good, would it?

So here are some tips gathered from gnat and midge dodgers around the world.

1)   Wear sunglasses at all times.

3)   And cover arms and legs if you can; apparently midges don’t bite through clothing.

4)   But wear light clothing instead of dark.

7)   But if you do get bitten, don’t sweat it. The best thing to do is to soap it to avoid bacteria.

Very well, I’ll give the tips a go. Still, who would have ever thought it—gnats in the city? Actually, they are midges. Whatever! They are all the same rotten lot.  And if you ask me, they are best left in a hazy memory, far, far away in the distance. Now that’s idealistic.