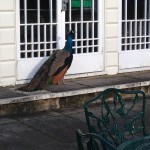 The Monday before Christmas lived up to its nickname, panic Monday, with last minute shoppers crowding the streets, despite the inclement weather.

Though my day got off to a calm start with a drive to Knightsbridge in record time under a dry, though dreary, sky, it catapulted into chaos by lunchtime with a tedious queue at Marks & Spencer’s car park in the pouring rain, the howling wind beating against the windows.

By nightfall, I wanted to cancel our trip to the theatre but nudge as I might, Paul and the folks at the Queen Elizabeth Hall (South Bank Centre), didn’t agree, so off in the scowling weather we went to see Fascinating Aida, a favourite cabaret trio.

The show went on and I am so glad it did. It was an evening of brilliantly scripted yet wild comedy that veered on the serious side now and again.

Founder of Fascinating Aida, Dillie Keene teamed up with Adele Anderson and Liza Pulman for a captivating show, which will run in London until January 10. After a short break, the trio will move on to Derby in February.

One song, though witty, reveals Adele Anderson’s touching story of making a major life change. According to Dillie, it took ten years to write the song, so complex and personal was the subject. That’s commitment if you ask me and certainly skill and talent.

Having seen the group perform at least three times, we weren’t disappointed. If anything, we were uplifted and ready to get on with celebrating Christmas, which included a fantastic celebration with family on Christmas Eve and a spectacular lunch on Christmas Day at Monkey Island, a remote island near Bray on the Thames, which happens to be home of two stunning peacocks.

That’s it, Christmas wrapped. New Year’s is up next. On that note, wishing everyone not only a happy and safe New Year’s celebration but also a wonderful 2014. In any case, do proceed calmly.