An Essay on Writing from the Deep 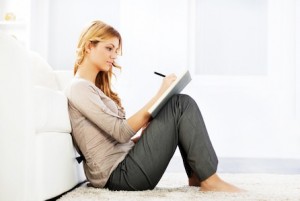 You write in order to change the world … if you alter, even a millimetre, the way people look at reality, then you can change it.’ James Baldwin

When I wrote The Barrenness, I hoped to start a worldwide conversation on the topic of being childfree and childless. I chose fiction not only because I love the genre, but also because I wanted the story to be any and every person’s story, not just mine. I have been delighted with all the attention around the subject, from the media and like-minded writers. Today, I get far more Google Alerts on the topic than I did six years ago. I have even participated in some research on the issue.

Writers write for a number of reasons: to entertain; to seek resolution; to change the world; to start conversations. Malcolm Gladwell, in his mid-October Goodreads chat, cited the last as a motivating factor for writing his best-selling books.

In writing my second novel, The Blindsided Prophet, I’d venture to say that my purpose was closer to Baldwin’s. I didn’t imagine that I could change the entire world, but my goal was to change the way readers think about their beliefs and values — their religion, if you will — at a deeper level. After all, believing something religiously is a cornerstone for any society, and has a profound effect on everyday living.

A few years ago, after supper at a writers’ conference, I had the ear of Jacob Ross, a brilliant and celebrated Afro-Caribbean writer, who is also my mentor. I must have been rambling about a novel I had written with church people at the centre, when Jacob popped the question: Are you deeply religious?

Having grown up as a Southern Baptist, I have always been a person of strong faith, and therefore, could have easily answered affirmatively. But taunted by internal and external misconceptions, I will never forget the rush of thoughts that passed through my head. On the one hand, some thoughts were loaded with a wariness of any and everything holier-than-thou, suggesting that admitting to deep religion would colour me as a writer. These were associated with being referred to as a ‘Holy Roller’ by the well-meaning grandmother of a dear friend.

And on the other hand, other thoughts were laden with feelings of inferiority. I thought of Baldwin’s play The Amen Corner, in which church people behave rather like most people, often hypocritically, though purposefully. Thus, I said ‘no’, quite firmly, and washed my hands of it … or so I thought.

Years later, I still cannot get my answer out of my head, and have long since realised that I wasn’t true to myself in answering Jacob.

Thus, the novel became The Blindsided Prophet, in which, as a writer, I have attempted to explore this basic question on some level, although not necessarily as a Christian, as I think its answer is important for anyone in the big scheme of life, regardless of religious association. And I firmly believe that faith underpins writing rather than dictates or restricts it. Writing is a gift to be used naturally.

Having said this, The Blindsided Prophet has been called ‘dark, psychological fiction’, which contains explicit language, abuse and sex scenes. Nonetheless, it is story about redemption. No matter how broken you are, you can be restored. This is God’s message to the people through the prophet, Isaiah Brown.

In the characters’ language and behaviour, we see their states of mind, as is often the case in fiction, but is equally as important in real life. Great men and women of the Bible had dark pasts. After committing murder, Moses lived in exile, until God liberated him and gave him the opportunity to liberate others: the people of Israel, who had been enslaved in Egypt for generations.

I am by no means comparing my novel to the Bible, but the point is this: the stories of the Bible are demonstrative of issues and struggles that seem larger than life.

Baylor University student and teacher, Alan Noble, in his Citizenship for Confusion blog said as much about the Bible, while writing about misunderstandings in J.D. Salinger’s The Catcher in the Rye: ‘… as Christians, we have a beautiful work of art filled with hard truths, ugly scenes, offensive claims, and moments of darkness at the very centre of our faith!’

In discussing this topic further with some writer friends — one is a Christian, the other is not — I was reminded of Flannery O’Connor’s views on being a Catholic author. She was clear in an article in American, in 1957, that a Christian writer’s work, like that of others, should be judged by its truthfulness and wholeness, not the writer’s faith.

O’Connor’s writing is some of the most haunting I have read, particularly the short story ‘A Good Man is hard to find’, in which an entire family is executed.

I do think she would agree that every book isn’t suitable for every audience. As for my books, they are written as adult fiction, and even so, they aren’t everyone’s cup of tea, but that doesn’t make them purposeless. Admittedly, The Blindsided Prophet may make some people uncomfortable. And some will reject it altogether.

When I first saw the film, Crash, I was shocked out of my comfort zone. I debated with anyone who wanted to, or who didn’t want to, about how dark and disturbing the film was. But soon, I realised that it was in discomfort that I found understanding of the situation.

I couldn’t relate to the movie personally, but having grown up as a black woman in the US, I found the husband-and-wife scene with Thandie Newton and Terrence Howard, in which he watches on helplessly while she is sexually exploited by a police officer, too close for comfort.

My discomfort was such a distraction that, initially, it coloured my ability to see the candour of the movie: the key messages it had to offer on social injustices and hidden racism.

In The Blindsided Prophet, this is a lesson for the character Mae Cook, who builds a fortress around the surface of her beliefs and values, steeped in convention and ceremony. She is challenged to look beyond the surface of those values, and to find out what it means to seek the truth in every situation, not just when it validates her beliefs.

Will this mean changing fundamentally? Not necessarily, but it will mean changing perspective on the fundamentals in order to accept true understanding. Isaiah talks about a New Covenant, meaning a different way of experiencing God, through one’s own freewill and mind.

In encountering this new way of thinking and of being, it is my hope that readers ofThe Blindsided Prophet, regardless of their religious beliefs, will explore the novel as a literary creation, rather than judging it against the writer’s faith, as they would any such theme underpinning a work of fiction.

So getting back to the question of why writers write: for all of the above reasons and many more. But ultimately, to tell a good story, often regardless of their own faith, but sometimes in their faith, or rather their beliefs.

In any case, Malcolm Gladwell talked about the importance of story above all else. My mentor couldn’t agree with him more. As for me, I absolutely love a good story, and when all is said and done, that is what I want to offer readers: a good story, as simple as that.

This is the real reason this writer writes.

Written on November 5, 2013 at 10:36 am, by SLewis
Categories: On Life, On Writing   |   Tags: Malcolm Gladwell, The Barrenness, The Bible, The Blindsided Prophet, Writers, Writing