Seeking the Silence of Prague in London 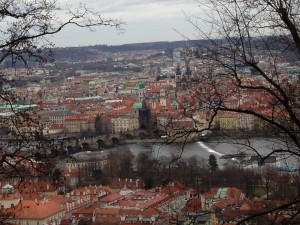 In London, we are bombarded with sounds, as daily construction work progresses and life in general takes it course, horns honking, sirens screaming, people shouting and so on. Even when I am running, I hear the jingling of bicycle bells and the rustling noise the tires make on the boardwalk.

As I write this blog, the jack hammering fills my ears. I can’t escape it unless I leave my home. Where am I to go—to a coffee shop, for a walk along the Thames Path, to the library? Where can I get some respite from this noise?

Lucky for me, so I think, I know just the place. I head out the door and make my way to the boardwalk, which leads to Hotel Verta’s luxury spa and gym, where I will see my trainer for our weekly one-hour session.

But no sooner than I join the footpath, I see her heading my way. So much for a quiet walk but her company is welcome. A pleasant woman, she engages me in interesting chitchat along the way. Still, in the distance I hear the screaming of an ambulance, a police car, the buzzing of a helicopter, even if it is only in my head by association. Verta is where London’s heliport is located.

Never mind, I smile to myself knowing that in minutes I will be inside the sanctuary—peace and quiet at last, so I think. More on that later!

For now, speaking of silence, Prague, the capital of the Czech Republic, has a quiet quality about it that is unbeknownst to most cities. Last week in honour of Valentines Day, Paul whisked me away to this magically beautiful city, where we had only been once in 2001. Then neither of us noticed its stillness, perhaps so overwhelmed by the tragic hijackings of September that year.

Heaving with tourists, particularly in its hot spots such as the Charles Bridge and Prague Castle, we found it quite possible to slip into stillness, admiring the historic buildings and imaginative sculptures positioned around the city. 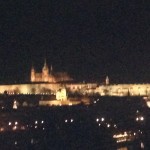 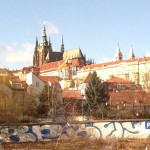 Were it not for the worry of pickpockets, as we were constantly reminded, and the consequences of globalisation—McDonalds, Starbucks and the occasional contemporary eyesore such as the Intercontinental, built in the 70s—we could have easily envisaged the city as it was centuries ago.

Also, while standing on a lesser-known bridge and overlooking a neatly manicured park, it was easy to imagine Prague as the perfect place for a clandestine rendezvous. Shush, not that, but rather a place where allies might have exchanged intelligence during the Cold War.

And maybe it was. As it happens we met a Dutchman, who told us of being in Prague as a little boy when the city was on the brink of Russian invasion.  He remembered people ushering his family in the right direction, so to speak, until they were out of the city. They had no idea what they might have come up against, until they returned to Holland.

What a remarkable story, as is Prague’s. For instance, the capital managed to escape any real damage to speak of during World War II.

According to a tour guide, folklore tells it that Prague was Hitler’s dream city, where he planned to live after the war.Whether this is fact or fiction, it’s a great hypothesis.

The city’s beauty is alluring, from the Old Town Square to Petrin Hill. My favourite place is Paris Avenue, where the couture designers are located, and not just for the shops but also for the stunning architecture. The city also boasts a magnificent skyline, viewed from several spots such as Petrin Hill and the top floor of the iconic Dancing Building, where we dined at Celeste, one of the city’s top French restaurants.

Fine dining… ah ha. That could be why I found this morning’s training session hard going and rather noisy. Forget what I said about a pleasant woman? On the contrary.

In the meantime, I did find peace and quiet right at my desk, if only for a spell. The construction workers, however, were up to their ears in rain. It, of course, has a way of putting a damper on things. In this instance, wouldn’t mind hearing it again, and soon.