Perspective In The Eye Of The Beholder 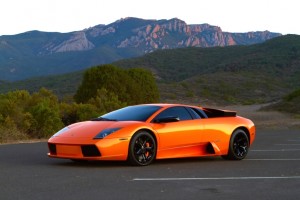 And I thought my packages were extravagant–beautifully wrapped boxes from Net-a-porter, Matchesfashion.com, Harrods, etc.– until I saw the brightly coloured Lamborghini delivered to my neighbourhood recently.

On my way back from an hour of much needed training, I was contemplating my soreness and how I might convince myself to return to my computer to write (as I haven’t written for weeks, owing to stress masquerading as writer’s block) when I saw this expensive spectacle being backed off of a truck.

As I fixed my eyes upon it, suddenly fathomable prose struck me with an exciting force. Not that I hadn’t anything to write about before laying eyes on this car. There is plenty of that.

From the London restaurant where the tables have built in computers to order one’s dinner to the magnificent Alexander McQueen: Savage Beauty exhibition at the V & A, I have been a girl about town lately. Not to mention the enthralling yet dark play, The Nether, at the Duke of York theatre, focusing on life without consequences. Disastrous! Not the play, which is rather brilliant, even if it is haunting.

Anyhow, that’s three more blogs to come, but with stress addiction (to be explored in a Huff Post blog surely) I was stymied until I saw the Lamborghini.

Enchanted as I was, I moved past the car rather quickly and into my concierge to pick up my own package, which Paul ought to put into perspective now surely, don’t you think. And then back outside, I glimpsed the owner zipping into the parking garage.

Up to the truck driver I strolled and confirmed that it was indeed a Lamborghini since I don’t always get my cars right but I do remember a friend of mine pointing out years ago that ‘the darn thing has wings.’

Anyhow, the truck driver smiled in confirmation, albeit staring quizzically, perhaps wondering if I was a groupie of sorts of if I lived in a hole somewhere. So glad to be a writer again, I dispelled any groupie myths and moved along, knowing that on some level he must have known that I had seen my fair share of such cars in London. Who hasn’t? From Lambos to Aston Martins to Bentleys, they are all here.

At one point certain posh hooligans had to be fined heavily for drag racing along Piccadilly. Never mind this. The point is I had never seen one delivered or witnessed the owner admire it, accept it and take possession of it so to speak.

Something about this experience got me thinking coherently again. Although the car is lavish by most standards, it reiterated something to me about perspective—it is in the eye of the beholder.

With that thought, I tore into my rather modest package–shush it’s a Sophie Hulme handbag. Let’s hope Paul agrees. Regardless, there’s more to come soon, that is writing. Well, maybe packages, too.