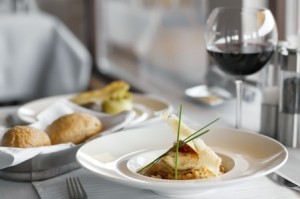 Over the years, the restaurant scene in London has gone from abysmal to laudable, so I am told. As far as I am concerned, it has always been pretty good. In my 16-year experience here, the capital has been on the upswing with celebrity chefs putting it on the food map.

The trouble with this is that when the chefs cease being celebrated or experience a seriously big hiccup, so might London’s food reputation, needlessly.

Celebrity chef Heston Blumenthal’s two Michelin-starred Dinner at the Mandarin Oriental in Knightsbridge is at the centre of a norovirus outbreak and thus, will be closed for at least 10-days.

This is, of course, a serious matter unto itself but what makes it even more serious is that the chef had to close another of his great restaurants, The Fat Duck in Bray, in 2009, for the same reason.

While judgements and suspicions are flying around—is he experimenting too much—I am quick to defend the restaurant (went there last year for my birthday and loved it!).

The chef, also known for integrating science into his cooking, is wildly imaginative, creating dishes such as snail porridge and nitro glycerine ice cream.

I will have none of that, thank you. But absolutely love what he does with lamb, even beef, often slow cooking to perfection. We have tried it, at least Paul has, at home. Delicious!

To this end, abandoning Heston because he has had two unfortunate major events would be like turning my back on Rafael Nadal because he lost the Australian Open. Never!

Unless, Rafa somehow dishonours his public image in such a way that it is beyond a shadow of doubt that he’s no longer great, I’m standing by him. The same goes for Heston.

Anyhow, if you look at what the experts say, experimenting has nothing to do with norovirus.  According to the NHS, the illness, also known as winter bug, can spread rather quickly if an infected person doesn’t wash their hands before handling food, therefore, tainting it. Individuals can also catch it by touching contaminated objects and surfaces.

Recently, there was an outbreak on the Royal Caribbean cruise ship, affecting 600 or so passengers. In the case of The Fat Duck, it had to do with a bad lot of oysters. As for Dinner, the BBC reports that 24 diners and 21 staff fell ill.

Will I go back? Likely. Easy for me to say, you think. I didn’t catch the illness during my time at Dinner and, neither did thousands of others. But I do sympathise and can commiserate with those who were less fortunate. I have had food poisoning from at least two restaurants in my time–one part of a fine, fine hotel chain, and the other has plenty of accolades and willing dinners. Both places are still going strong.

And I have been back and am here to tell the tale. The difference in what is happening with Dinner and the places I had my bad experience is that it’s in the limelight. As such, the spotlight will shine on the restaurant and its celebrity chef in both good and bad times.

Let’s hope the bad times are over because if you ask me Dinner is one of the best restaurants in the capital and that’s filling a tall order nowadays.