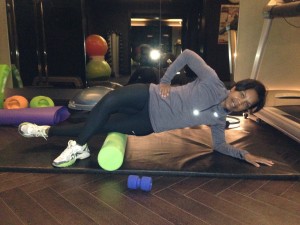 A month  in the US calls for a reality check. Never willingly or knowingly will I disown my birth country, but for the first time in 15 years, I felt seriously homesick for my adopted country, at least my adopted city.

Though my time in the US was both fulfilling and rewarding, it left me feeling rather melancholy.

I could blame the sombre feeling on a number of things, but I will spare us all the analysis and pin it on one thing–imbalance.

Precisely, the relationship between my life in the UK and my visit to the US were completely out of sync. In fact, my world in the UK ceased to exist, except for the short  conversations I had with Paul daily.

Rightly or wrongly, I found myself in a web of commitment  to my parents that left little room for anything else. Some say it was a web of guilt; in any case, that’s another story.

The point is most days from 5.30 a.m. to at least 11 p.m., I stayed on task, shirking the following: reading, running (except two hard three mile runs), exercising (withstanding two insufficient work outs) and writing, full stop. My dad likened me to our hardworking caregiver who reminds me of the never tiring Energizer Bunny, though I did tire.

For instance, every time I found the time to sit down with my iPad or my dad’s MacBook to write, I became listless, wordless to be exact. To my editor in the UK, I must say sorry for dropping the ball and never picking it up again on the Huff Post blog. Ironically, its subject had to do with writing (metaphorically) one’s own ticket via thinking.

Too deep I told myself and tried my hand at lighter subjects, including running in dreadful heat, dealing with cashiers as slow as molasses, and being hugged by a hostess in a restaurant. Still, I didn’t produce anything.

It was only after Nadal lost at Wimbledon, followed by Federer, then Maria Sharapova, and finally Serena Williams that I accepted the melancholy for what it was–imbalance.

No matter how accomplished you are if you are imbalanced, you’re likely to be off your game. Very well, I told myself! But it doesn’t have to define you.

So it has been. Today, I think back over the month of June and see that homesickness was less about leaving Georgia and more about returning to a balanced existence, that is if you can call a chaotic airport a balance. Heathrow, true to its reputation, was overflowing with thousands of passengers at the border, most of them foreign.  Good thing I tagged along with Paul or I might be still queueing now.

And never mind the weather’s cool and gray reception, far from Georgia’s hot and bright climate, even in the rain. Memories of sun rays burning through steamy rain are fresh in my mind. Now that was refreshing.

Still, it was time to say goodbye. Anyhow, with time the memories will become stale, as will the melancholy. Quite frankly I have a book to promote, several blogs to write, and a race to run, literally–10K coming up soon!

Written on July 3, 2013 at 10:35 am, by SLewis
Categories: On Lifestyle, On Wellbeing, On Writing   |   Tags: Energizer Bunny, Heathrow, United Kingdom, United States