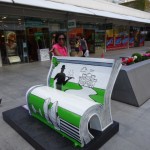 I can’t stop talking about my literary weekend, so to speak. It was not only brilliant but also full of surprises – not the kind that I love to hate. Remember, those are the ones that I know are in the making. These jewels are nowhere near my radar until they happen.

First, there was the Books About Town exhibition to be in London until 15 September.  On 7 October the book benches will be auctioned to the highest bidder. Of course, we planned ahead but I had no idea how amazing the benches would be. I simply can’t choose a favourite. But I do know which one is the most sophisticated. Umm!

Anyhow, what are my chances of snagging one, you reckon? Nil, I can hear Paul saying in the background. Never mind! We had a fantastic time Saturday, checking out the art on the Bloomsbury Trail.

Not only are the benches cleverly designed, but also each represents a book or series of books, if you will.  While other book lovers blazed the trail on Saturday, too, so did art lovers and some, just plain old London lovers or shall I say lovers of London. 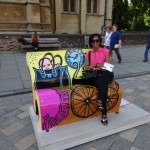 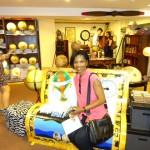 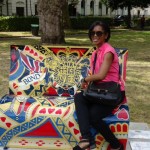 Apparently, art around town in the capital is not a new thing and in all of its diversity, it is unlikely to become old hat anytime soon. In 2002, the capital hosted CowParade, which Paul and I had seen three years previous in Chicago. Fantastic!

Then in 2010, London was home to 250 life size baby elephants. Where was I? Though I somehow missed this one, some of the folks I met on Saturday will never forget it.

Two years on during a year of great hoopla for London, the capital celebrated Easter with more than 200 giant Faberge eggs. In a daze in 2012 for one reason or another, I don’t remember much about this stunning exhibition, either.

Thank goodness, I clued in on the book art, which alone was well worth making the trek. Still, bonuses not only included discovering more of London but also interacting with some of its people—amazingly sociable, contrary to popular belief. And best part was the weather, perhaps the most popular conversation of the day.

Speaking of popular, that brings me to the second surprise of the weekend. We had the opportunity to hear William Paul Young, author of The Shack, speak on Sunday.

Paul and I showed up at our church as we do, clueless as to whom the speaker would be. And this is not the first time we happened to be at the right place at the right time. Anyhow, it was a pleasant surprise to hear from the acclaimed author. While perhaps not as colourful as the book exhibition, he is arguably as creative.

In short, the book is a tremendous exploration of the human condition and man’s relationship with God, if you will. And Paul Young created it.

Four years ago, I reviewed The Shack. So I won’t do that again but I do have at least one new over arching thought about it—it is perhaps one of the most powerful metaphors of one person’s life that I have read.

Before hearing the author speak of his painful history and the bearing it had on the novel, I’ve often jokingly wished that God had given me The Shack, such a story if you will. Now putting all joking aside, I see why and how the author and his worldwide audience so deserve the goodness that has come from one tiny book. It is a big message. And at last, I get it.

Now back to those fabulous benches, you think I’ll get one somehow. Never mind! I’ll definitely find my way around another Books About Town trail, and soon. Can’t wait to be surprised!