Greece: Heating Up or Cooling Down 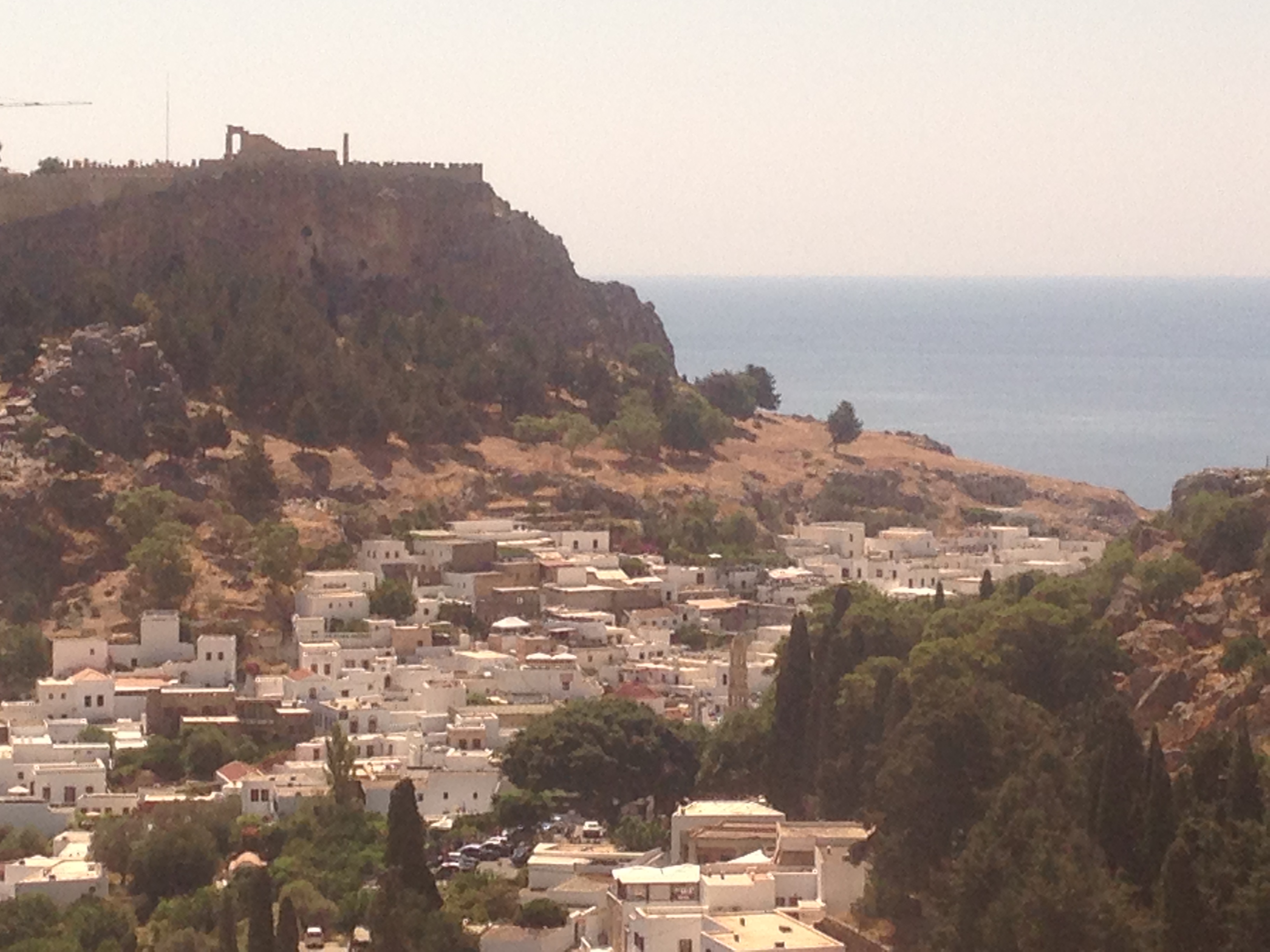 Rhodes, Greece – What can I say about Greece? Ancient yet modern, idyllic yet flawed, and energetic yet sluggish. I can also say that it tells some of my favourite stories of all time–those of the Trojan War, Medea, Cupid, Zeus, Hera, Helios and so on.

It’s a wonder I didn’t make my way here until now.

Anyhow I’m here. Speaking of Helios, he’s breathing hot air on the island right about now–idyllic for some (e.g., Paul) and flawed for others (e.g. Sonja). Make no mistake about it, I like the sun. I grew up in Georgia USA and have spent plenty of time in Fla., the sunshine state.

But having lived in London for about 15 years, my skin and hair have both taken a mild disliking to intense heat. Hence, the armour of creams and sprays to battle it. Of course, there’s two sides to every story and the other side to warm is cool, easily found here too, if you like a dip in the pool or the ocean or only come out at night for strolls by the sea. The latter takes care of idyllic for me.

As for the modernity of the place, you’ll find fancy resort hotels that come for several dimes a dozen and plenty of decent shopping in Rhodes town. But if this is not what you came for, a trip to the city’s acropolis and/or a stroll around the old town will surely offer the traditional Greece.

Meanwhile, in spots at the resorts, in town, and transporting there and back, you get the feeling that Greece is on the upswing. And so it is,according to analysts. Most recently, the country’s ship tycoons have agreed to help with the debt. Still, the ailing economy, which faltered back in 2009, has a long way to go–empty restaurants, bars, etc…are more apparent than full ones. And this is the high season.

Heartbreaking for me and I’m just a tourist. I can only imagine what the proprietors feel like, trying to lure the few people milling around into their establishment.

During good times, this might have been a sport or a game for these big hearted people. During the down times, however, I get the impression that they don’t feel in charge of the game at all. Still, as a group they couldn’t be any more hospitable. Paul and I have been welcomed generously everywhere as have others I have noticed and made to feel right at home.

To this end, there’s no way to go but up. But before we are back in the air and on the way back to England, we will get out and see more of the upside of this idyllic island–Greek dancing tonight and a trip to Lindos to come and much more.

Meanwhile, time to cool down. A toe in the pool. Okay, a leg at least. How refreshing!