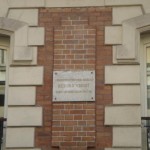 Whether the city of lights has more character than the big smoke is debatable if you ask me. While the former has an unmistakable youthful buzz that seduces anyone who comes near it, the latter has an indisputable sophistication yet a mellow politeness that draws its visitors back time and again.

Ask anyone for directions in London and you will soon be on your merry way. Not in Paris. You’ll be spinning around in circles until you figure it out yourself. Better take along a compass and a translator for that matter. And forget securing a taxi, but even if you do, be prepared to feel unwanted the entire ride.

Still, if you ask my godson, he’ll tell you there is no contest. Paris has it! While I don’t agree, even I have to admit that Paris is everything youthful, even its older attractions, the Sacré-Cœur and Notre Dame, for instance, still seem to be in their prime.

No wonder so many writers, particularly American ones, have flocked there. Gertrude Stein, Ernest Hemingway, Richard Wright, Ezra Pound and James Baldwin all spent extensive time there. Wright even gained French citizenship and moved his family there permanently.

In Michel Fabre’s book From Harlem to Paris, Wright is quoted as saying, “Can you imagine what this means to me? I never knew a city could be so beautiful.”

So it is. Paris is a beauty. And no matter how many times I go there, I too am lured to the left bank where Wright and others lived and worked. And repeatedly, as I looked around Paris, wherever I was, I saw a grand building or monument and was reminded of the words that my husband’s childhood French friend coined when he was a first time tourist in London.

Of St. Paul’s, Westminster Abbey, even the Tower of London, he said, “we have this in Paris but only bigger.”

He has a point. Even the gardens (jardins as they call them) are sprawling.You don’t have to go to Versailles for this. We found a vast, beautifully manicured landscape on the left bank. But still the debate goes on. London’s Hyde Park is not to be sneezed at.

Lots of differences between the two places, no doubt, but there is one particular that connects them from centre to centre–Eurostar, the high speed passenger train.

Arguably, it is the best mode of transport operating between the two. From St Pancras to Gare du Nord, it takes two hours and twenty minutes flat. This is better than flying by a long shot even if you are averse to the tunnel under the English Channel. This part of the journey only last for 30 minutes.

Well worth shutting your eyes and forgetting where you are for it is the tunnel that enables travellers to strip out the hassle that comes with air travel and cut back on the expense and time it takes to reach city center from an airport.

At your point of origination, you go through immigrations, passport control, and security and wait briefly in the Eurostar lounge–London definitely the better of the two. At your destination, you stroll pass a few officials without further delay.

But first you do need to board the train and take the journey. Now you get what you paid for: a reserved seat, comfy enough, even in coach. But don’t expect excess on Eurostar. It’s all basic, particularly the food, unless you bring your own.

Anyhow, who needs food when you’re on the fast track? Best to save your appetite for city center—London or Paris. You choose or do both.