Remembering the Sociability of Holiday 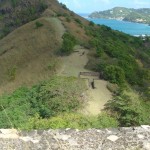 Having returned to London after a week in St. Lucia, I can’t help but notice the pull of gravity in the air, on the ground, all around me, whereas in St. Lucia, everyone and everything kind of floated through the days and nights.

At the risk of stereotyping the people of St. Lucia, I will say they have an easygoing air about them. From the children who rode beautiful horses wildly along the beach and often showed off their aquatic skills as well, to the older gentlemen with long white hair and sun baked skin who appeared to mentor the younger men, they were all rather refreshing.

Perhaps it’s something to do with the sea that casts a spell of fleeting sociability on the people, the birds, the insects, etc. One of the locals told me it had to do with living and making a living. But whatever it was, it rubbed off on the holidaymakers, who mingled not only with the locals but also with each other as if they had left their cool culture behind.

Now I don’t mean to suggest that Britons are anti-social at home – on the contrary, if mixed in a room together to do one thing or another. Even if begrudgingly so, they mingle. And plenty are willing to offer a helping hand on the streets if asked but few, if any, go out of their way to start a conversation with a complete stranger just because, unless they are on holiday.

As such, how refreshing it was to meet a man well into his fifties, who had learned to swim recently as part of the rigorous training he took on to sail across the Atlantic in his first boat expedition ever.  He made it and enjoyed it, too! There’s hope for this non-swimmer after all.

Then there was the mother of nine; yes you read correctly, nine, who still manages a successful business. Wow, is all I can say.  And how could I forget the no named, outgoing gentleman who entered the ladies dressing room in the hotel’s departure lounge to blow dry his wife’s hair. And he wasn’t a hairdresser either. Refreshing, right. On the contrary, but never mind. He was on holiday

Anyhow, that’s behaviour for the birds literally. The St. Lucia birds didn’t honour any etiquette to my mind, hanging out in the dinning room as and when they pleased and sneaking food off plates very eagerly. Also, they visited balconies and rooms if the opportunity presented itself.

On one of our outings we ran into an ornithologist of sorts who dispelled any concerns of a bird take over. He did, however, confirm that the birds, one called the bananaquit, had an affinity for sugar, a key ingredient in the local food and drink. Ah ha!

Perhaps that explains the mosquitoes too. I got more bites than I did when I was staying out in a remote village in the Philippines. Though I could have done without the insects in particular, they come with the lush vegetation of the island, gorgeous flora and fauna.  Nothing like seeing bird of paradise in its true habitat!

Still, I’ll take it anywhere I can get it and the sociability, too, of people that is. As for the overly zealous birds, which produced the sounds of wind chimes, quite often after the rain, and the illusive mosquitoes that struck in the night, I am happy to leave them on holiday, even if it does mean giving up the tropical climate. 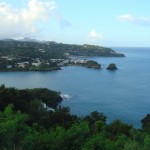 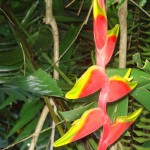