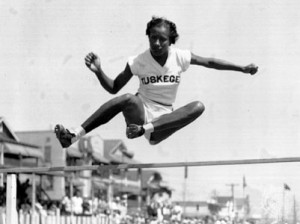 For many African American famous firsts, it is either getting late in the evening or night has come for their final rest, as is the case for Alice Coachman Davis, the first African American woman to win an Olympic Gold medal.

Mrs Coachman-Davis, who won her medal for the high jump at London’s Wembley Stadium in 1948, died on Monday, July 14 at the age of 90. Though her achievement itself is enough to celebrate, where it happened and where she is from makes the achievement that much more special for me.

From Albany, Georgia (the place I have called home for years now, though my family originates from nearby Leary) the record breaker won the medal right up the street from where I live now, if you will. More than 60 years later, Wembley Stadium continues to host some sporting events such as football, also known as soccer to some. Years ago, Paul and I saw Tina Turner and Lionel Richie perform there.

How appropriate for me to be in this space about now.

Somehow I can’t help feeling a special connection. Though I didn’t have the pleasure of knowing Mrs Coachman-Davis, I have known of her for years, if only through the school that bears her name in Albany.

Interestingly enough, my sister Carrie, who has been in the Dougherty County School System for many years now, landed her first teaching job at Coachman Park Elementary School. And the story gets better.

Her then principal, Mrs Obzeine Shorter, was one of my first grade teachers.  In those days, the class was split between two teachers.  The other was a Mrs Boston, also from Albany.  To the best of my knowledge the latter woman died some years ago. Mrs Shorter lives on.

Wonderful firsts but not the lasts, I am sure. At London 2012, for example, women continued to make history. Females secured 29 of Team USA’s 46  medals. The women’s basketball players  won their 5th consecutive Olympic gold medal in London.

What a fitting to time to look at some of the noteworthy firsts in life. Share your memories here. As for now, I join thousands, if not millions, of others in celebrating the life of Alice Coachman-Davis and extending my condolences to her family.